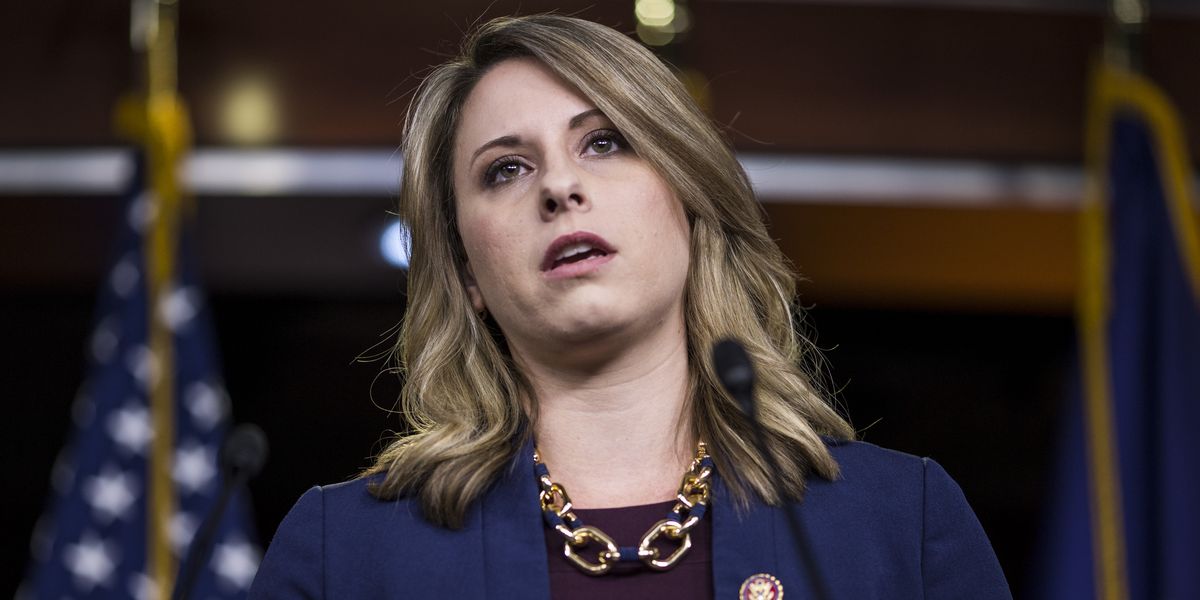 Last fall, Democratic congresswoman Katie Hill—rising political star and a favorite of Nancy Pelosi—resigned amid a House Ethics Committee investigation into allegations that she engaged in two sexual relationships with staffers. The case was complicated: The alleged affairs with her legislative director (a violation of House rules, and a charge she denies) and subordinate campaign staffer (which she admits to) came to light after intimate images were published online by a right-wing website without Hill’s consent.

Tabloids were quick to dub her relationships a “throuple” and, as Vox pointed out, conservative outlets emphasized her bisexuality. In an impassioned resignation speech, she blamed her estranged husband for leaking the nude photos and a misogynistic culture for “capitalizing” on her sexuality. “We will not stand down, we will not be broken, we will not be silenced,” she vowed. “We will rise and we will make tomorrow better than today.”

Nearly four months later, Hill says she’s working hard to keep that promise. In an exclusive interview, the former congresswoman tells ELLE.com she’s “re-entered the boxing ring—only this time in a different uniform.” She’s cooking up several new projects, including a political action committee, and says she has a big announcement coming—which some have speculated to be a book deal—that will be revealed later this week.

What she can say for now: “I wasn’t ready for my work to be done.”

After leaving her political post in October, Hill thought long and hard about what she wanted to do next. She asked herself: “How can I fight for the issues I believe in and actually change policy? And more importantly, how can I change the power dynamics and change the face of power?”

The answer, Hill believes, is a PAC.

At the MAKERS conference in Los Angeles earlier this month, she announced HER Time, a brand-new coalition dedicated to mobilizing and supporting politically-inclined young women. Through the organization, Hill plans to provide financial resources and mentorship to budding candidates, with a focus on Democratic candidates looking to flip seats. Hill says HER Time will also recruit potential first-time female candidates and guide them through the process of running for office.

“So many people reached out to me in the aftermath of [my resignation] and said, ‘I’m somebody who wants to run. What do I do? I don’t want this kind of thing to happen to me,'” she says. “I’ve talked with young women, and said, ‘I want to be perfectly clear. This is a risk. This is something that can happen, but it’s a risk that you’ve got to take because we need you.’ The fight is up to us to make sure that that this doesn’t happen to future generations of women.”

Hill sees HER Time as a “higher risk-taking group” compared to other PACs like EMILY’s List, which also helps get Democratic women candidates elected. A pillar of HER Time’s mission, as stated online, is to “support… long-shot candidates who have the vision and drive needed to make lasting systemic change.”

“I want to focus on whether candidates fit their districts, not whether they are the likeliest to win or the ones who are the most well-resourced,” Hill says. “I imagine there will be quite a bit of overlap, but I would like to [connect with candidates] before EMILY’s List does and hopefully by getting my endorsement, that might even help them get theirs.”

Hill believes there was a “good chance” she would have gotten re-elected had she not resigned, but the thought of being a “liability” to her classmates, colleagues, and family gave her pause.

“I made a mistake,” she says. “[In politics], you are going to be exposed in ways that you can’t even imagine, sometimes quite literally. The more powerful you are and the higher you rise, the more at risk you are, and that’s just a reality. But if showing that what happened to me didn’t destroy me can make it a little bit easier for somebody else to consider running, then I want that to be possible.”

Here’s Why You Have Dry Skin and What You Can Do to Get Rid of It
Iconic Shoe Designer Sergio Rossi Dies at 84
<i>Black Widow</i>: Everything We Know About the Prequel Starring Scarlett Johansson
Hulu’s <i>Little Fires Everywhere</i> Changes A Lot From The Book. Does It Work?
Finding Solace in Life’s Absurdity and Terror in <i>Joe Versus the Volcano</i>