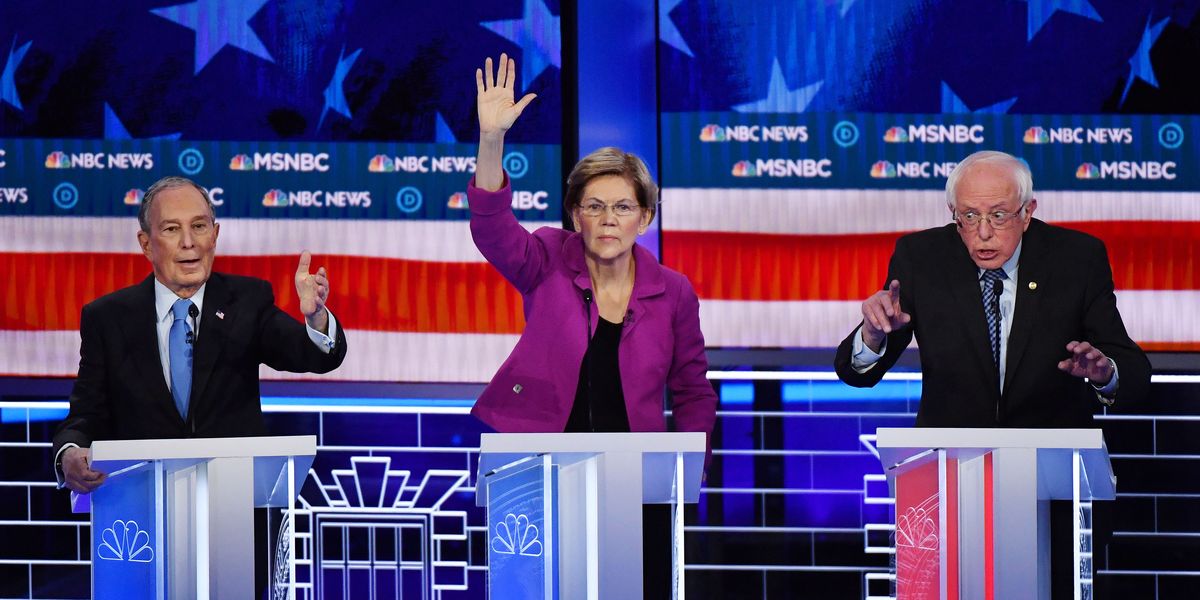 Seven of the remaining Democratic candidates for president descend upon Charleston, South Carolina tonight to once again hash out their plans for America, to point out their ideological differences, and, most importantly, to fight each other in hand-to-hand combat, MMA-style. Or, perhaps it should be M4A-style. Either way, right now, Senator Elizabeth Warren is climbing one of those chainlink fence cages while crowing loudly in an empty auditorium while Senator Bernie Sanders is practicing deploying his new Adamantium claws. Democracy is a sacred institution but it’s always full of surprises. Let’s take a look at some of the things we can look forward to in this Cage Match for Liberty.

No, don’t adjust your TV Mx. and Mx. America; you’re not seeing double. There will be two billionaires on stage at tonight’s debate. Not only did Michael Bloomberg qualify for the debate but fellow rich man who thought this was a good idea for some reason Tom Steyer will also join in the fracas. Attempting to rebound from a widely-panned performance at the Nevada debate where Warren took him apart at the molecular level, Bloomberg will appeal to voters by hiding a bag of money under every seat in the theater. Earlier today, I caught him on my Nest cam throwing five dollar bills at my window. Just balling them up and tossing them. It was wild.

Yesterday, Team Bloomberg took to Twitter to decry some vandalism some of their offices around the country had suffered, which is a strange way of saying “we’re winning,” but what do I know? I’m just a person who collected $45 from my front lawn. One such instance happened in Flint, Michigan where a presumably anti-Bloomberg Flint resident spray-painted “Eat the Rich” on a poster board and taped it to the front of the campaign office.

While this isn’t necessarily polite, I’m not sure that this qualifies as vandalism. At best, it’s a misbegotten new direction in the Chick-Fil-A “cows who can write” ad campaign. At worst it’s a negative Yelp review. I am concerned, however, that Bloomberg will take this as a hint and start opening up pop-up restaurants around the country with actual rich people on the menu. “Tonight the chef is recommending the Hot Pockets Heiress.”

Meanwhile, Tom Steyer will probably just show the trailer for the new Madame C.J. Walker movie and remind America “You liked this rich person so…”

Oh, honey, as we saw last week, Amy Klobuchar’s knives are all the way out. She’s going to Minnesota Nice Mayor Pete into the next county. One of the things that’s so fascinating about Senator Klobuchar is that when she really gets going on Pete Buttigieg she starts to vibrate with incredulity. It’s like Marianne Williamson is astral projecting into her and she’s trying to keep a lock on herself so she can finish her sentence. If at any point tonight Klobuchar turns to Buttigieg and says “Girlfriend, you will not be getting a hot dish” you’ll know that Marianne has entered the chat.

Last night on CNN, Buttigieg repeated a line he’s used a couple of times during his campaign, remarking that he’s “not running to be president of the gay United States.” While the spirit of this statement is meant to draw attention to his broader appeal, it does beg the question: where are these gay United States? Calgon, take me away.

Some have suggested that the Gay United States includes a handful of large cities in which I do not live, which is frankly offensive to me. What am I doing sitting here being local with all these succulents then? The truth is the Gay United States is always in a state of flux and can appear and disappear at any moment. You could be in Gay America right now, if you’re lucky! Some places that the Gay United States has recently been spotted: the break room at every tote bag factory; the parking lot of a Celine Dion concert; REI; any time someone looks for Google Image photos of an old-timey president when they were young, sepia-toned snacks; every time the book Red, White, and Royal Blue is opened; weirdly enough, the cereal aisle at Wegman’s.

Just straight up chaos. Like a Black Friday Sale at a Walmart in the late-1990s that is running low on Tickle Me Elmo dolls. But, for freedom. It all goes down tonight… and for the next nine months. Bring your most expensive appetite!

25 Adult Board Games to Fill Your Now-Very-Free Evenings
Hulu’s <i>Little Fires Everywhere</i> Changes A Lot From The Book. Does It Work?
Here’s Why You Have Dry Skin and What You Can Do to Get Rid of It
Iconic Shoe Designer Sergio Rossi Dies at 84
Selena Gomez Reveals to Miley Cyrus That She Was Diagnosed With Bipolar Disorder